Comics round up: babes, barbarians and evil dead things

Yee-haw, it’s a comics roundup! I’ve mentioned before that graphic novels generally take less time to read than other books, so I thought I’d save my reviews of comics to present all together in one big chunk. 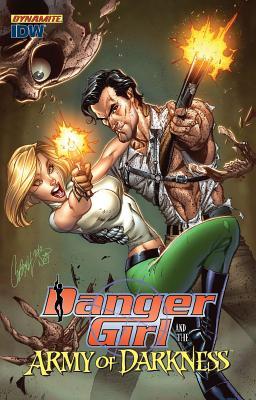 Danger Girl and the Army of Darkness
(Dynamite/IDW, 2013)

In this franchise mash-up, acerbic store clerk-cum-demon slayer Ash from the Evil Dead and Army of Darkness movies once again faces the deadite hordes as he crosses paths with Abbey Chase and the other babes of the spy agency Danger Girl as they try to recover a missing page of the Necronomicon ex Mortis from the hands of an evil mercenary army.

Danger Girl and the Army of Darkness isn’t pushing the comics medium to new heights, but it’s a pretty fun crossover, especially if you’re a fan of Danger Girl and/or the Evil Dead and Army of Darkness films. Chris Bolson’s art is generally pretty good, but not really to my taste. It seems a little busy to me and maybe (just maybe) I’m outgrowing the whole T&A cheesecake thing. Andy Hartnell’s writing makes for a lighthearted read, but it’s not really as funny as I think it’s supposed to be. And Bruce Campbell in comics is nowhere near as cool as he is in real life (you can catch him on the TV show Burn Notice these days), but it’s still a neat homage to Raimi’s Evil Dead movies and a fun story for Danger Girl fans. (3 stars/5) ★★★✩✩ 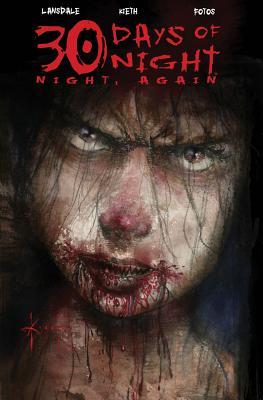 Joe Lansdale, Sam Kieth, and a whole mess of blood and guts. What more could a kid want? 30 Days of Night, Again is Joe Lansdale’s take on arctic circle bloodsuckers. When refugees from a northern town overrun by vampires encounter a scientific expedition they join forces to battle the vampire horde hot on their tails. But when a mysterious capsule containing what could be a legendary golem is discovered, it could mean their salvation…or their destruction.

Lansdale’s writing is what you’d expect from from him: fast-paced, funny and foul-mouthed. It was great. If I have one criticism it’s only that the story seemed a little too fast, like this was only one chapter in a bigger story. I don’t know, maybe it continues elsewhere. But there were far too many interesting ideas in 30 Days of Night, Again to not expand on it. Nevertheless, it’s a thoroughly enjoyable (and bloody) vampire book.

Sam Kieth’s art is, if nothing else, interesting. You’re either going to love it or it’s not going to be your thing. As for me, I love his art. There are panels beautifully painted and then, for some quirky reason, the narrative will be jarringly interrupted by intentionally amateurish cartoony drawing. This is Kieth’s style and I found it funny to read his notes in a special section at the end of the book where he almost apologizes for his unconventional artistic style. I can see how a lot of people might not care for his art, but it’s a lot more interesting than what the majority of copy-cat comics artists do these days. 30 Days of Night, Again is good. Check it out! (3.5 stars/5) ★★★✬✩ 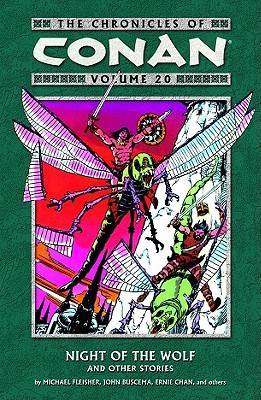 The Chronicles of Conan, Volume 20: Night of the Wolf and Other Stories
(Dark Horse, 2010)

I’ve been a Conan nerd since the dawn of the Hyborian Age, but I have to admit that before my worn paperbacks of Robert E. Howard’s original stories ever sat next to my trigonometry book in my school backpack, I was reading Marvel Comics’ Conan titles, Conan the Barbarian, King Conan and even the occasional Savage Sword of Conan (when I could sneak an issue– that one was magazine-sized and focused for a more “adult” market). My first exposure to Howard’s Cimmerian savage was really through comics. So The Chronicles of Conan reprints of those old comics are really very cool to me. My only gripe is that it would cost me a pretty penny to get them all. On the other hand, I can’t complain that there are so many of them. Anyway, I think I probable still have many of the original issues in my comics dungeon.

But the The Chronicles of Conan collection are put together with quality paper and sturdy bindings, so if you happen to be a muscle-bound barbarian yourself you won’t goof up the pages like you would the cheap newsprint of the original comics. Plus, the artwork is beautifully recolored, so you don’t have those tiny 4-color dots like in the old comics.

Volume 20 collects Conan the Barbarian issues #151-#159, mostly featuring one of my all-time favorite comics artists John Buscema. Actually, even when I’m reading a Robert E. Howard Conan story, in my mind’s eye all the action looks as if it were drawn by John Buscema. All you kids today can take your computer-assisted illustration and your Photoshop whatnots. I get along just find with old school pencils, brushes and India ink. Computers can’t replace talent and that’s exactly what John Buscema had.

The Chronicles of Conan, Volume 20: Night of the Wolf and Other Stories is one great volume in a great series of comics reprints. ★★★★✩ Four stars, by Crom!

Okay, kids, that’s it for now. I’m juggling with reading a couple of other books right now and I hope to have reviews up before too long, but it might be tough because I am on a serious Downton Abbey kick right now (watching the season 2 DVDs; yes, I’m obsessed, and don’t you dare judge me). ‘Til next time…

2 thoughts on “Comics round up: babes, barbarians and evil dead things”