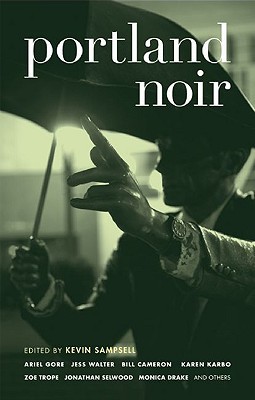 I’ve been to a lot of places, but I’ve never been to Portland, despite having lived in the Pacific Northwest for most of my life. I’ve been to Ashland once for the Shakespeare festival, but have to admit that I rarely even think of Portland. When I do think of Portland it is usually because I am remembering the Dead Kennedys’ song “Night of the Living Rednecks.” These days I am reminded of Portland when I remember that I’ve been meaning to check out the show Portlandia, which I understand is pretty funny but have never seen. Or I think of the Portland-based singer Luz Elena Mendoza who appears in the recent Portland tourism ads and she’s pretty cute in that commercial. But I understand that Portland has become quite cool of late, a veritable hipster haven. I may be totally off, but I sort of imagine Portland as a more-hip Tacoma. Portland Noir is one in a series of noir short story collections by Akashic books, each centering on a locale and featuring writers from that area, in this case, Portland, Oregon. The idea is intriguing and i really like the idea of exploring noir-style in settings other than the usual L.A. or N.Y.C.

Portland Noir is edited by Kevin Sampsell and features stories by Ariel Gore, Jess Walter, Bill Cameron, Karen Karbo and several others. With sixteen stories in the book, it’s enough to keep you busy and give you a pretty good representative view of Portland’s writing talent. Most of the stories are good and provide a sense of the Portland area. I particularly enjoyed Dan DeWeese’s “The Sleeper,” which, though not a crime story, has a wonderful noir-feel of nocturnal loneliness and desolation. A few of the stories are a little mediocre, though, and failed to make much of an impression on me.

One thing I noticed, though, that many of the stories weaved in the image of Portland being a hip town a little heavy handedly, like I’d be out of place if I wasn’t wearing a vintage concert tee, skinny jeans and horn-rimmed glasses while saying ironic things to my equally hip friend over some kombucha mocha lattes after biking to the coffee joint on my single speed road bike. Not that there is anything wrong with that, but the hipness was just a little self-conscious in some of the stories and I had the impression that Portland has a lot more to offer than that. Sampsell writes in the intro:

Later, in the 1940s and ’50s, the city practically thrived on criminal activities. Speakeasies, brothels, and gambling dens popped up across the downtown area. The police, the district attorney, and local Teamsters were all in bed with the local vice pushers. Portland became known as quite the decadent town, even prompting Bobby Kennedy to wrangle up its main bad guys for a televised Racketeering Committee meeting in 1957. One senator said at the hearings, “If I lived there, I would suggest they pull the flags down to half-mast in public shame.”

Ah, yes. This is the Portland I was hoping to read about. Sin and corruption is far more interesting than lentil loafs and skinny jeans.

The verdict: ★★★✩✩ (3/5 stars) Portland Noir is a good collection of some very good stories and some “just okay” stories. Portland is a setting that is fully ready for the noir treatment, but I would have preferred a more consistent feel that is more tied down to Portland’s history rather than its current hipster-vogue status. Nevertheless, Portland has got some great writers. I’d like to check out the also-available Seattle Noir next (Seattle being described by Sampsell as Portland’s “creepy old uncle,” a more accurate and complementary assessment I could not imagine). 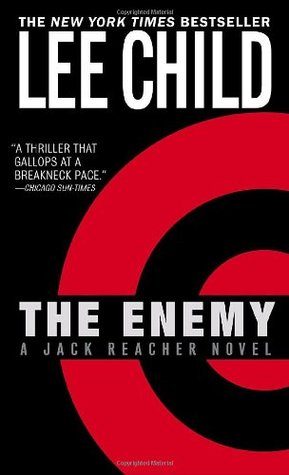 It’s New Year’s Eve, just on the cusp of a new decade, 1990, and military police officer Major Jack Reacher has just arrived at his new command after being inexplicably reassigned. He doesn’t have time to enjoy rolling in the new year though because before he’s even settled he gets a call from the local cops. A general has been found dead in a cheap motel room, apparently of a heart attack. The situation seems hinky to Reacher, but what can you do? Even general officers might have liaisons in cheap hotel rooms. At least he went out with a bang. But when the general’s wife is found murdered in her home and other seemingly unrelated murders start occurring, Reacher knows something is dirty. With the help of a young, female MP lieutenant, Reacher uncovers a plot that extends into the highest ranks of army hierarchy.

The Enemy is Lee Child’s eighth Jack Reacher book and now that I’ve read it I’m done with the entire run of novels until Personal comes out in September. I guess I’ll have to read some of the short stories to tide me over. Anyway, I would have preferred to have completed the run of novels on a high note since I really enjoy these Jack Reacher books in general, but The Enemy, while starting off promisingly, managed to be one of the weaker novels in the series.

As mentioned in the synopsis above, The Enemy is one of those Reacher novels that go back to his army days and it’s written in a first person perspective. It’s always kind of fun to see what Reacher was like in the old days, but as I have mentioned before in other reviews, Child does not write convincingly about the U.S. Army. I guess it doesn’t really matter, but a lot of it comes across as kind of goofy, like driving around in humveess all the time rather than a GSA vehicle (oh, and humvees don’t have a “big red start button”; it’s a switch). It’s like if you’re a medical professional and you’re watching some TV show where the doc stabs the patient in the heart with a giant syringe of atropine and says “Live, dammit!” and you’re like, “Noooo…come on.” It’s like that. But I guess I don’t mind the inaccuracies too much. I just kind of correct things in my mind as I read.

But even though Reacher has made a career of the military, with all the rules and regulations it’s not his best environment. Reacher doesn’t do rules and I like him best as a wandering loner. And the plot of The Enemy didn’t really capitalize on Reacher’s particular talent for causing all kinds of physical mayhem and violence. Of course we know that Reacher’s a pretty clever fellow, but let’s be honest. We all like to see him bust some heads. There is little head busting in The Enemy. The plot mostly involves Reacher and Summer (the female MP lieutenant) checking things out and following up leads. That, in itself, is okay, but the mystery they’re solving is just so convoluted and far-fetched that it’s a little preposterous.

There are, however, some good moments, like when a hungry Reacher urges Lt. Summer to ask a nun if she’s going to finish her in-flight meal, or Reacher’s funny (but juvenile) way of dispensing justice to the main bad guy in the end. The Enemy also incorporates a significant event in Reacher’s life, the death of his mother by cancer and he and his brother Joe must come to terms with that.

The verdict: ★★★✩✩ (3/5 stars). The Enemy is not the strongest Jack Reacher book, but is a serviceable mystery. Though it’s light on action and the coherency of the plot is questionable, Reacher’s humanity is highlighted as he deals with the death of his mother and this part for me made up for the rest of the novel’s shortcomings.

Strange days: What It Was by George Pelecanos

It’s 1972. Roberta Flack is at the top of the charts and bell bottoms are in style. Soul brothers carefully shape their afros, while ads urge men to not be a stiff and get the dry look. Cars are big and use a ton of gas but who cares? It’s not like we’re gonna run out.

Derek Strange, just a few years after leaving the metro D.C. police, has gone on his own as a private investigator and he dreams of buying a neon sign for his office, the kind with a magnifying glass in the design. When a young woman hires him to recover a missing ring, the investigation uncovers some unlikely leads. Strange crosses paths with his old partner on the force, Frank Vaughn, and they inevitably team up to stop a ruthless killer known as Red Fury who’s popping dudes all over town.

That’s what it is in What It Was, the fifth Derek Strange book by George Pelecanos, but the first in the series I’ve read. I can already tell that Pelecanos is well on his way to becoming one of my favorites. Like Elmore Leonard and Donald Westlake, Pelecanos has a mastery of casual language, the simplicity of which belies its ability to express. It’s not laconic, clipped prose. It’s just slick and easy and you can’t help but get caught up in the flow.

Pelecanos’ characterizations are also great. I have to admit that the name “Derek Strange” had me conjure up images of some sort of paranormal investigator or something, but Strange isn’t strange at all. He’s a young (in 1972) black man trying to get established as a private investigator after quitting the police force. He’s got a girlfriend he loves, though he admits that his wandering eye is a weakness. He loves his mom and brings her take-out from their favorite diner when he visits. All in all, Strange is a cool, confident man, but working hard to grow out of youth and he’s still got a lot to learn along the way.

Frank Vaughn is also an interesting guy. An older white man with a lot of time on the police force, Vaughn isn’t exactly racist, but he’s a “product of his time,” and though he really tries to open up to the changing times it’s hard to teach an old dog new tricks. He’s good guy at heart, but he’s also an old-school cop, not unwilling to get rough or bend the rules to get justice.

In the hands of lesser authors, these characters might be somewhat cliché, but Pelecanos carries this off adeptly. Likewise, the setting and time period could easily have come off as kitschy, or maybe like a Tarantino-esque homage to blaxpolitation films and funk hits, but Pelecanos’ early-’70s D.C. rings true, capturing well the racial tension of the time though Strange and Vaughn’s unlikely friendship.

The verdict: ★★★★✩ (4/5 stars) What It Was is really a great crime book. I might almost go as far as to give it 4.5/5 stars, but I’m trying to be discerning in my ratings these days and reign in my enthusiasm. But it could easily have received the additional 1/2 star. I’d heard of Pelecanos before and I understand he writes for the show The Wire, but I’ve never seen it (I’m terribly behind the times). Just judging by what I’ve read in What It Was, Pelecanos is going to be my next favorite author. He’s just awesome.