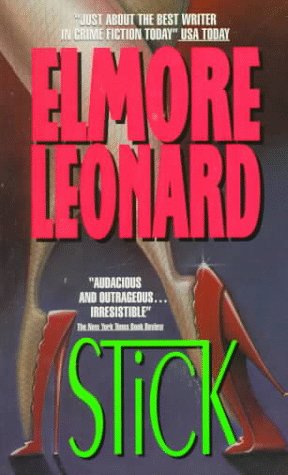 In 1985 there was this movie called Stick, starring and directed by Burt Reynolds and this movie was based on the Elmore Leonard novel of the same name, published in 1983. I haven’t seen the film, but I’ve heard it’s pretty lame. I even heard that Leonard’s experience with the film was so bad that he disowned the whole deal. I guess others felt the same way since it was a box office flop. I just mention this because while reading the novel Stick I just could not see Burt Reynolds as Stick. I kept imagining him all through the novel as my main man Lee Marvin. And J.B. Smoove would have been the perfect Cornell. Now, I realize that you’d have to get a couple of time machines to get these guys together for a 1985 production, but hell, I would have seen that movie.

Stick‘s about a guy named Ernest “Stick” Stickley, an ex-con (though my dad would have argued that there is no such thing as an “ex”-con; once you’re convicted you’re convicted, unless it’s overturned. It’s pedantic, but I feel a compulsion to mention that) fresh out of the stir and ready to make a clean life for himself. He’s moved to Miami to be close to his daughter and his hostile ex-wife (in this case “ex” works). He hooks up with a prison buddy called Rainy who’s got a gig going on, but when it goes down things go horribly awry. Rainy gets himself killed, and Stick realizes that bullet was meant for the new guy–in other words him. Stick then lays low and gets a job as a chauffeur for a rich financial guy named Barry who’s too slick for his own good.

But the world works in funny ways and Stick soon realizes that Barry has dealings with a weird dude named Chucky, the same guy that sent Rainy on his final, ill-fated job! Sooner or later Stick and Chucky’s path are bound to cross and Stick’s just remembered that he never got the five-grand promised him for that job. Throw in a smart and sexy financial advisor for Stick to chase and a Dude-Ranch-reject-cowboy-wannabe working with Cuban mobsters to chase Stick and you’ve got yourself a good time.

Stick is everything you’d expect a novel from Elmore Leonard to be: smart, witty and cool, with easy no-nonsense prose that sounds more like some guy just talking to you than reading a book. It’s a good read. That being said, there’s nothing in Stick that really stands out. The novel begins and ends pretty well, with a little bit of meandering fluff in between. But it’s still a fun book full of interesting characters and sharp dialogue. I understand thatStick is a follow-up to Leonard’s 1976 novel Swag, also featuring Ernest Stickley. I hear that one is pretty good, so I’ll have to track it down.

My verdict: ★★★✬✩ (3.5/5 stars). Stick‘s a good book that just falls short of being excellent. There’s everything you expect from Elmore Leonard and even though the plot sort of suffers from a lack of impetus, you still can’t go wrong with anything Leonard writes.